One would think that after my first trip summary, describing the agreement I have with the ocean and her ways, that I would be prepared to mentally endure anything she decides to throw my way. Well, the second trip served to test our mettle.

Upon our day of departure, we were already of the mind that a delayed start would be wisest due to there being strong winds present. Not really believing them to subside, we still made the better call of waiting for a more opportune time to make the sixty mile crossing to the Bahamas. Walking down the dock that morning, the winds were howling in my face, as if to say they would be traveling with us one way or another.

It wasn't so much the winds we had to contend with, but rather the ocean swell. Little to our knowing at that time was a tropical low pressure developing in the gulf that five days into our trip would become tropical storm Alberto. The body of the storm would remain in the gulf and drive straight into the southern states, but its reach would be felt all the way out to the Bahamas and down through Cuba. Bringing with it would be a storm-like wave swell, large amounts of rainfall and heavy winds.

The crossing, prior to any development of that storm, was a journey of itself. We hammered through head on seas the entire way, counting the bell ringers as we went. Any time a wave picks up the boat and lurches it down into the trough of the preceding wave, it would signal the impact by throwing the ringer of a bell we have mounted on the bridge forward and into itself. This crossing did not amount to too many ringers (only six in total), but it was a jarring enough start to the trip to send half of the passengers heads down into buckets.

Due to the late departure, we did not get to the Bahamas until 2245 and we were well past the hours of customs. The winds were still howling and we made an executive decision for safety to pay the cost of docking inside the harbor rather than stick ourselves out on anchor and endure a tumultuous night of rocking. By morning, it had done the trick and most everyone had regained their wits. The sun was out and the passengers were enjoying watching a manatee drink from the fresh water discharge of a boat sitting behind us. Its a rare sight to see these days, as they had been hunted to near extinction here. We still had another crossing to make from West End, down to Freeport and over the deep water channel to Bimini, but things were looking up already.

As we were first in line to see the customs agents, they filed in and cleaned the counters, preparing for their day of check-ins and clearances. As we were going through our paperwork, we had been hearing from other boaters that their crossings were just as rough.

A persistently strong (15kt) Southeast wind kept us on our toes for the next six hours as we crossed the Bimini channel. With the day being mostly clear and sunny, many of the passengers enjoyed time out on the deck. There  isn't much to see on this part, but sometimes letting your eyes get lost in the rolling blue water is just as hypnotic.

Nearly all the way there, we came into one of our favorite snorkel spots, Hen and Chickens. It was the perfect hour to throw down anchor, serve up a tasty refueling lunch and get in the water for everyone's first real enjoyable moment of the trip. The water wasn't as clear as it was last time, but there was still plenty of active wildlife to see while exploring the rock clusters.

We pulled up anchor and motored the rest of the way to get tucked in close to shore for the night. As usual, we were checking the weather conditions and now realized the low pressure had taken form. Updates from mainland were coming to us and we deliberated on what our options were. Routinely each night, the crew would guard themselves in a secure place so we could discuss candidly the severity of what was developing in the ocean. The first update that NOAA had put out, forecasted the Gulf Stream to build over the weekend from 4-6 into 7-9 and then up to 18-21 feet in wave heights. Windfinder had shown sustained winds of over 40kts for Sunday.

With this forecast, we initially thought we would have to cross back in two days time if it was not altered, but agreed we would meet back on the bridge each night to discuss our options as things developed.

As our plan to make each day count was now underway, we spent the next two days tracking dolphins before the seas blew up. After making two back to back crossings, we were hopeful to get the interns in the water for a much needed dolphin experience. On our first full day in Bimini, we were approached by a very large group of spotteds. Once we had the group in the water, the captain and I celebrated with synonymous cheers. It was the highlight of the trip to endure two days of rough crossing and see them elated by their first encounters with the dolphins. This aspect matters very much to us and as our primary focus is to ensure safety and try our best to provide the passengers with the experience they had hoped for. Finding dolphins in this moment felt like a huge accomplishment.

The encounter lasted nearly ninety minutes. Since it went on for so long, I was able to get in during the group swap and enjoyed the playful juveniles spontaneity. Certain calves will seek you out and continue to buzz around showing themselves off as the featured attractions. In footage its so obvious who these rascals are as they are constantly sticking themselves in front of the cameras and repeatedly belting out their signature whistles. 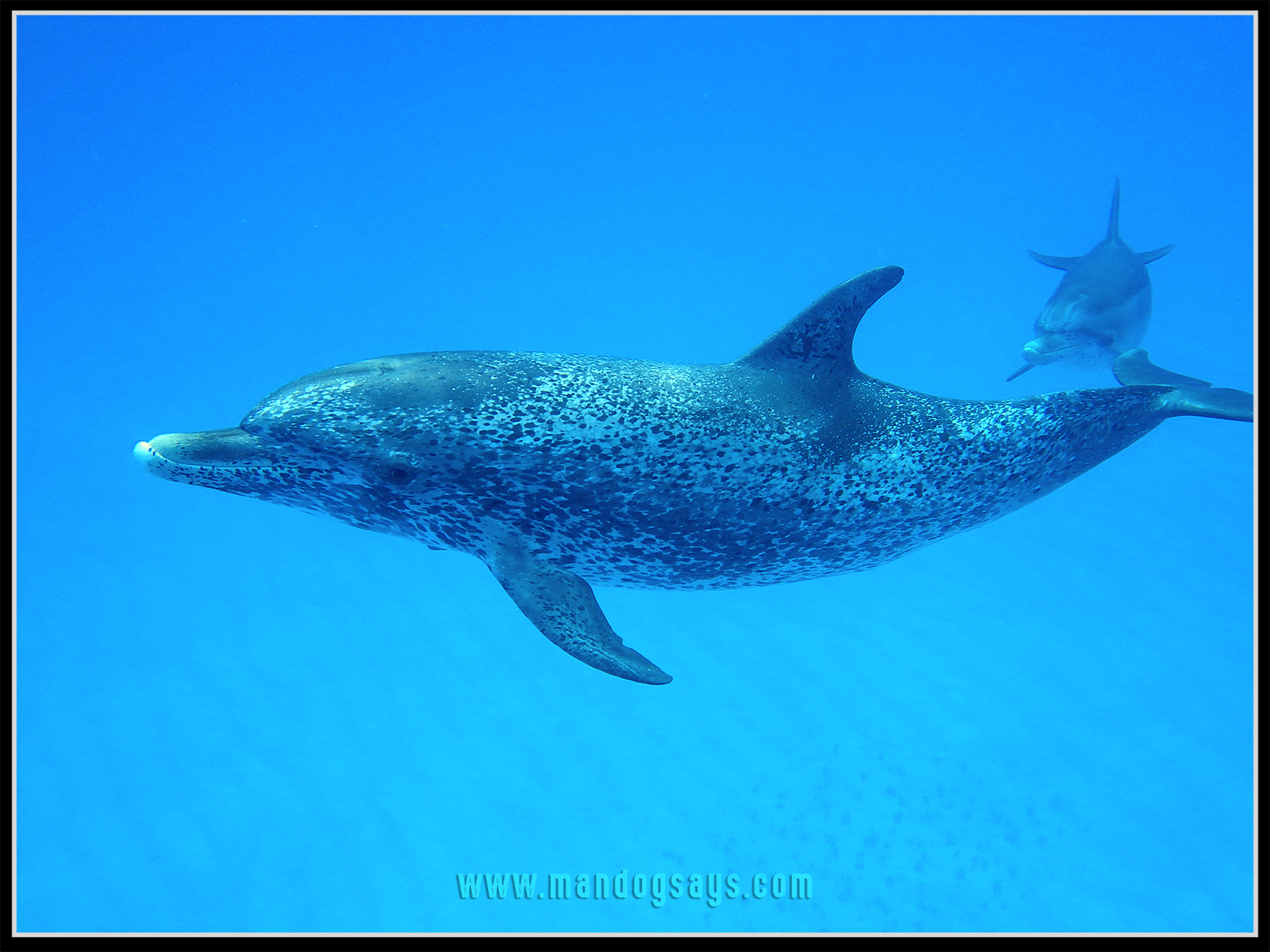 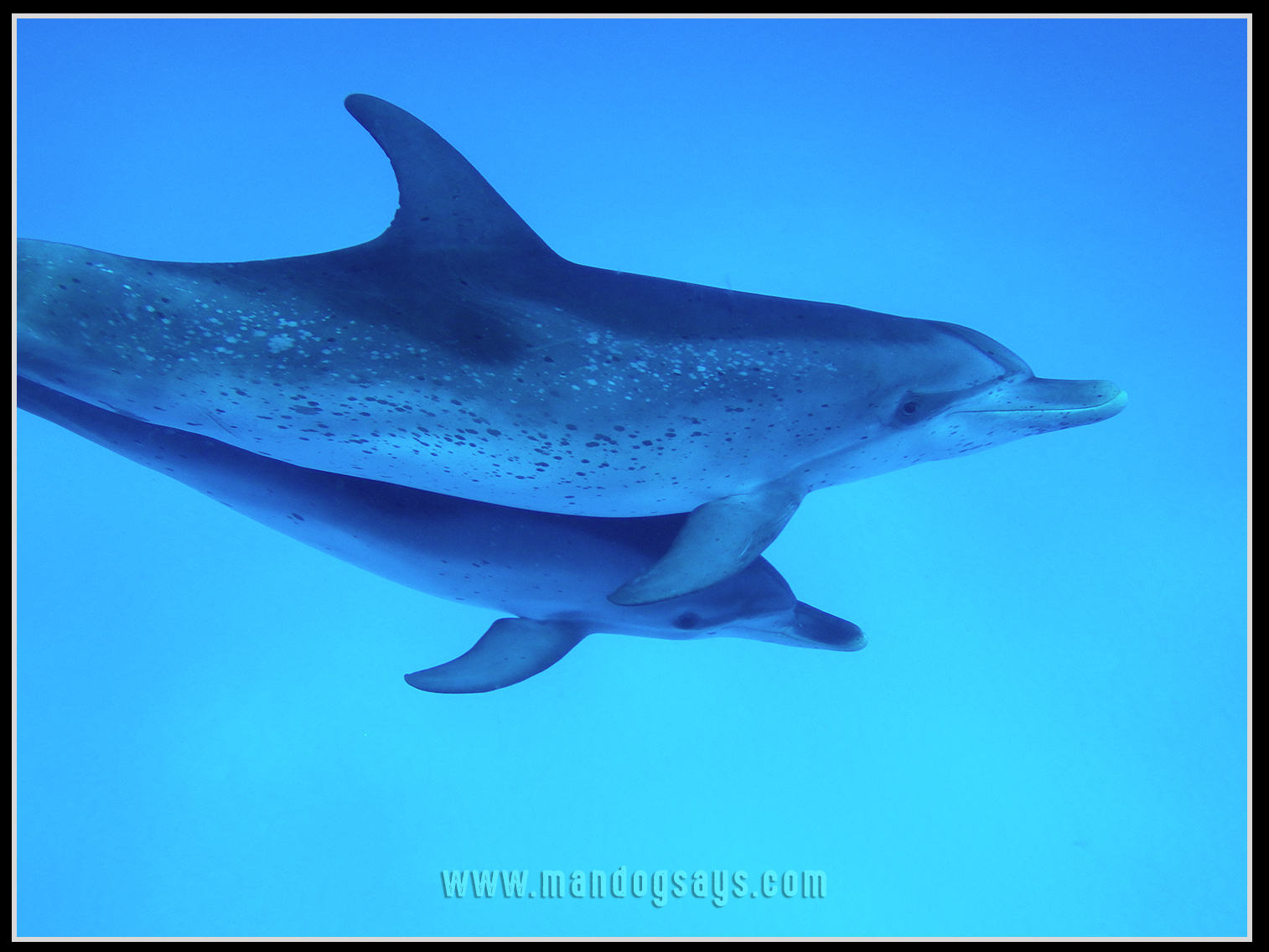 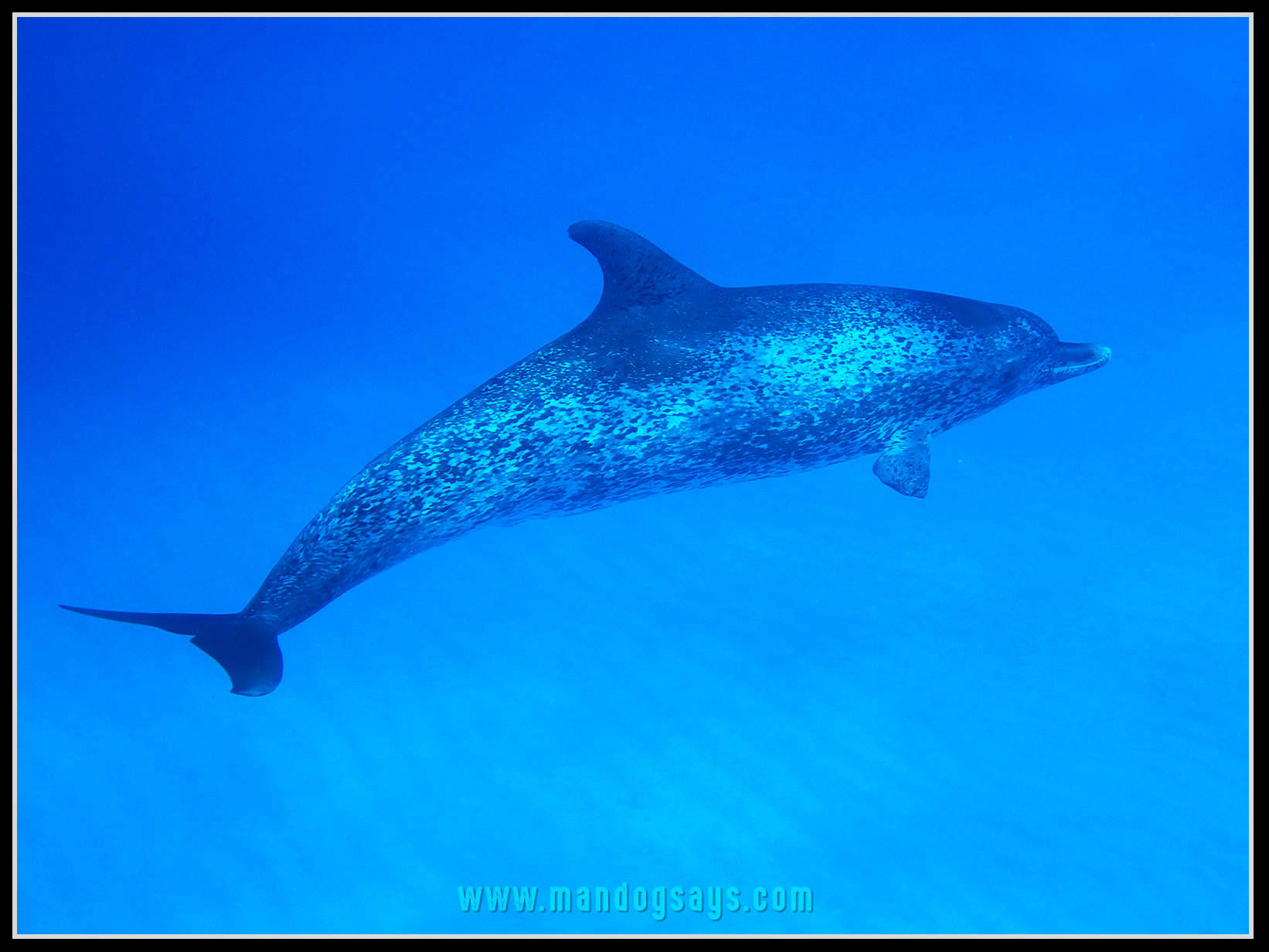 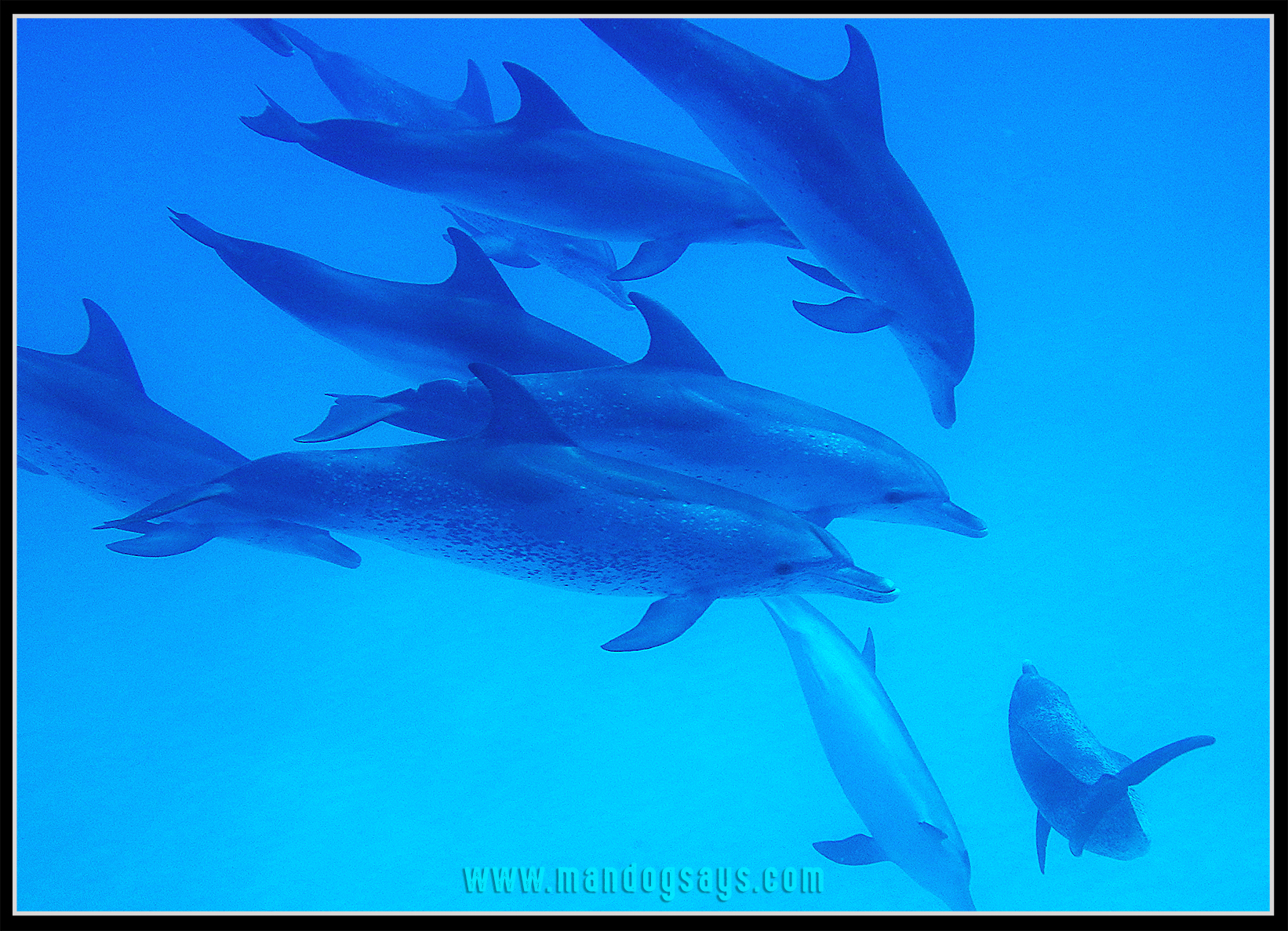 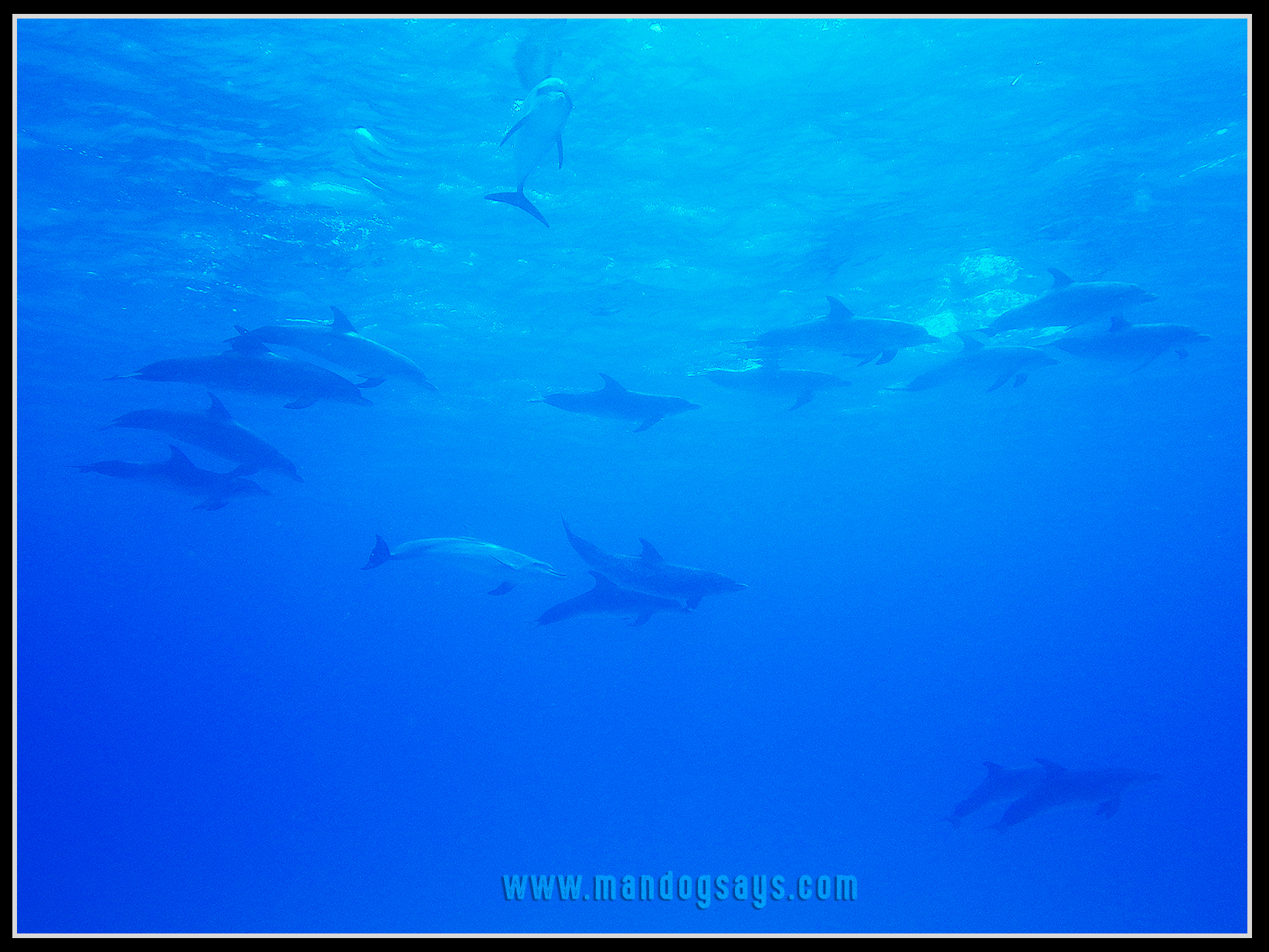 By Friday, our workable seas had disappeared and were now replaced by a wind shredded, choppy three and four foot sea. It was the signal to hunker down. Thankfully, the forecasts had backed off, so we were not in any danger, but would be stuck on anchor for two, possibly more days. We let out additional scope on the anchor line to hopefully reduce the bouncing. As the winds started to crank over the top of Bimini from a E/SE direction, the low pressure passed by the SW gulf side of Florida. Stuck broadside in a relentless, 3-5' swell that had a short, punchy interval, the boat was heaved left to right for the next three days. By Sunday, we had all nearly gone mad and so we pulled up anchor and drove around just to break the routine.

We did encounter some dolphins and allowed three researchers into the water who were very qualified swimmers. It was pretty big swell, but the waves were clean. We got on with a few traveling groups, but it was too rough for anyone else to get into the water. Later, the researchers laughed about their surfing abilities.

As we hugged the shoreline, working near the coast to save from taking a beating out in deeper water, I slowed down to enjoy the last pass of following seas. Once I reached North Rock, which is the last strand of island coverage, I had to turn back South and face the seas head on. As the boat lurched and bounced, I took off autopilot and manually steered, attempting to carve my way through the big sets. Encountering a bell ringer,  I determined this was our signal to get back onto anchor. Our fun was over and back to the hook it was. Our efforts paid off and we did managed to get some green water, surge-filled dolphin footage to review as a group that evening.

Not only did we have the relentless swell to endure, but the prevailing winds carried from the island swarms of garbage flies. The elements had gotten to us and we all started to go stir crazy. The captain and I did our best to entertain by asking questions, cracking jokes, talking to everyone in funny accents, suggesting games to play, whatever we could do to keep morale high. Last thing we needed was mutiny aboard. We did, however, encounter a bit of shenanigans attempted to be played out in the first few days, but we were keen to it and it didn't get past us. Subtly and sometimes directly, we would interrogate certain people to crack our way into who were the conspirators. We had flipped enough people to now know the full story and deemed three persons guilty. Deceit, conspiring and treachery were the three separate charges and all would be punished by a proper planking. None of which knew they were in line for it either.

The swell started to subside some, but as soon as we thought it was over, it would ramp itself back up again by nightfall. The winds and rain had also seemingly passed, but it did still leave us with flies, now including flying ants and no-see-ums as well.

On our last day, after some time with the dolphins and heading out to the deep water to dump, we cut engines and quickly gathered everyone onto the back deck. They all shuffled back bewildered as the tribunal was gathered. We threw on our dark black, boat coats with the hoods drawn tight and held deck brushes against the accused.

The first one, who acted out the plan was planked. The second, who conspired the plan was planked next. The third, who was a crew member attempting to dubiously play both sides was also planked. We sent them all toppling into the sea. We had a good time with it, and everyone was a good sport. Despite the conditions, I praised these guys time and again for hanging in there and making it a successful trip.

And so, in parting, I leave you with.. The Never Ending Swell